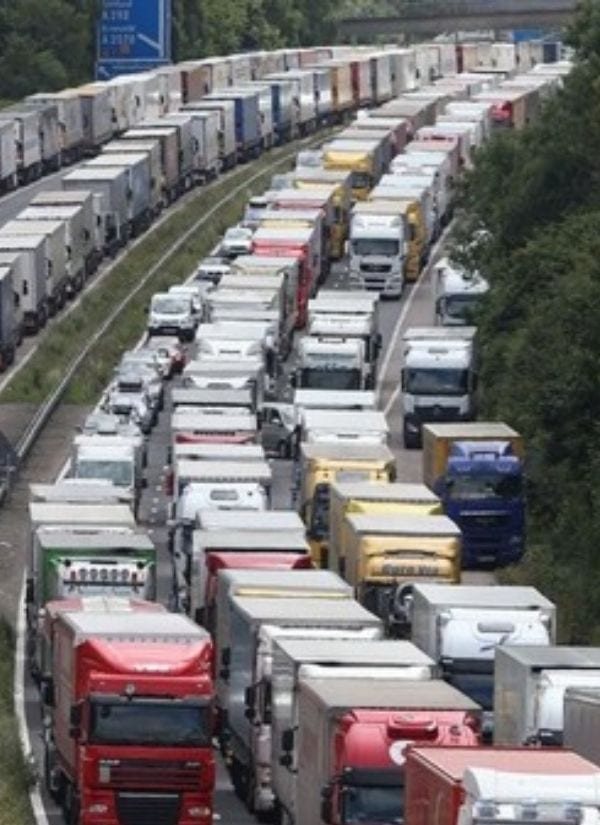 It doesn’t take a brilliant mind to work out the practical and economical reasons that HGVs (goods vehicles over 3.5 tonnes) are essential on building sites; being able to carry more materials and heavier loads means less journeys from suppliers to site or from one site to another….and the long and short of it is that construction as a whole would simply be impossible on the scale we see today without Heavy Goods Vehicles.

Their contribution to the industry is immeasurable, the use of HGVs means sites run more smoothly, jobs are completed more efficiently, and money is made more quickly.

However, there are some contributions made by HGVs that aren’t positive, such as the effects on air pollution, and the risk they pose to other road users – namely cyclists.

HGVs are responsible for a 5th of the UK’s total carbon emissions, with 40% – 50% of those emissions containing nitrogen oxides and fine particle matter that can cause respiratory diseases, cardiovascular illnesses, and other health problems.

Despite the huge advantages that HGVs have made possible to the construction industry, I doubt that it comes as a surprise to learn that their environmental impact isn’t a good one. HGVs obviously have more of an impact than other vehicles on the road due to their huge size and fuel consumption, and it’s the fumes and CO2 emissions that instantly come to mind when we think about HGV versus the environment.

But, air pollution is just the tip of the iceberg…

We’ll start at the tip because it’s the most logical place to begin, and we’ve already pretty much covered it. All traffic causes air pollution, and the levels of emissions from HGVs are considerably higher than from other types of vehicles.

The financial incentives that are offered – lower road taxes for ‘green’ vehicles, and cheaper ‘clean’ fuels are certainly encouraging companies to look at more environmentally-sound options, but high development costs and lack of current alternatives mean that, for now at least, HGVs are still a necessary evil for the construction industry.

As well as being among the biggest and most air polluting vehicles on the road, HGVs are also serious contenders for the noisiest.

Incredibly loud when in transit, HGVs can potentially cause a disturbance and annoyance for residents in the vicinity or en route to construction sites. Noise levels are measured by both Traffic Commissioners and local authorities in order to calculate the environmental impact of individual vehicles and fleets and to make sure that commercial vehicles are operating within acceptable limits.

Thankfully, when it comes to noise pollution, times are changing somewhat, and the latest specification vehicles do employ methods that reduce the excessive noise that comes from engines and braking systems.

It goes without saying that it’s only HGVs that are transporting chemicals, substances and waste that could pose an environmental hazard if spilt or not properly transported and handled.

There are a number of types of hazardous waste (chemicals, asbestos, batteries, solvents, oils) that could need to be transported on or off of a construction site, and so there’s always some risk of spillage and therefore an impact on health or the environment.

These types of HGVs – including those carrying controlled waste, such as domestic waste collectors – have to register with the Environment Agency in order to operate, which is reassuring….but, of course, that doesn’t guarantee that accidents won’t (or don’t) happen.

We’ve all complained about the state of the roads at some point I’m sure, and the truth is that roads which aren’t up to scratch will be negatively impacted by HGVs.

The clue’s in the name – they’re heavy, and the friction they create causes surface damage on the road, as well as damage to nearby buildings and other structures due to vibration levels.

How can this be avoided?

Changing to new types of suspension that are ‘road-friendly’ will help distribute the weight of HGVs on the road which, as well as reduces the damage to the roads, also allows HGVs to carry heavier loads than those without such suspension.

Ok, so HGVs are no friend of the environment – although given time, advances in technology and the development of more bio-fuels, they could be…

…but what about the safety aspect of such large, heavy vehicles and how they affect other road users.

Using sustainable building materials conserves energy on two levels. First of all, by using more efficient materials in the construction of buildings – we’re talking green insulating materials, on-demand water heaters, smart thermostats, low-flow toilets etc. Second of all, energy will be conserved on an even larger scale due to the fact that the manufacturing process of sustainable building materials results in less waste products, and therefore contributes less to the world’s landfills. 32% of all landfill waste comes from construction – with 13% of products delivered to sites going directly to landfill without even being used.

The use of sustainable materials within the building industry could cut those numbers dramatically over time.

HGVs And The Impact On Cyclists

While the urban environment has changed drastically within the last decade or so, with more cyclists in our cities and streets than ever before, the basic HGV cab hasn’t seen much change since the 1970s.

Their design is fit for purpose – contractors working on construction, landfill and quarry sites need high ground clearance to cope with the terrain.

But not when you consider that HGVs only spend about 2% of their time in off-road conditions. The rest of the time they’re on the roads with the rest of us, going to or from site, with a cab that offers very limited direct views to other road users without the use of mirrors or cameras, and therefore presenting a particular threat to pedestrians and cyclists.

For the sake of the environment and in order to tackle the country’s ever-increasing obesity epidemic, we should be encouraging more people to cycle in urban areas – even our biggest cities – but the statistics on safety regarding cyclists and HGVs make for pretty shocking reading.

Back in 2016, the Mayor of London announced the plans to introduce the world’s first DVS (Direct Vision Standard) to apply to all HGVs over 12 tonnes working in or entering Greater London from 2020, with star ratings (0 – 5) based on how much a driver can see of the area outside the cab, where vulnerable road users are.

By 2024 only three-star rated vehicles and above will be given a permit. Those rated two-stars and below would need to demonstrate that increased safety measures have been put in place.

Cycling UK believes that the Government should introduce a DVS for HGVs nationwide, modelled on this scheme, to be adopted in urban areas throughout the country.

There’s enough evidence to show that the amount a HGV driver can see from the cab plays a huge part in the number of collisions with vulnerable road users to warrant such a scheme.

Of course, we can’t say with certainty that collisions with cyclists or pedestrians would be avoided altogether if the driver’s direct vision was better, but a lot of the stats speak for themselves:

It’s hard to read the statistics on how HGVs impact on the environment and on the safety of other road users, without wondering why bigger changes haven’t already been made.

But there’s something else to consider:

Unfortunately there are those in the freight industry who are opposed to the safety permit scheme for HGVs for one major reason – the financial outlay that would be involved in transitioning their fleets of vehicles.

It’s a fair point – especially for some of the smaller operations out there.

….improving HGV road safety makes just as much business sense as it does safety sense.

Want to work with us?

Build what has never existed. Develop the products and tools that will shape the future.

Page load link
We use cookies on our website to give you the most relevant experience by remembering your preferences and repeat visits. By clicking “Accept All”, you consent to the use of ALL the cookies.
Cookie SettingsAccept All
Manage consent

This website uses cookies to improve your experience while you navigate through the website. Out of these, the cookies that are categorized as necessary are stored on your browser as they are essential for the working of basic functionalities of the website. We also use third-party cookies that help us analyze and understand how you use this website. These cookies will be stored in your browser only with your consent. You also have the option to opt-out of these cookies. But opting out of some of these cookies may affect your browsing experience.
Necessary Always Enabled
Necessary cookies are absolutely essential for the website to function properly. These cookies ensure basic functionalities and security features of the website, anonymously.
Functional
Functional cookies help to perform certain functionalities like sharing the content of the website on social media platforms, collect feedbacks, and other third-party features.
Performance
Performance cookies are used to understand and analyze the key performance indexes of the website which helps in delivering a better user experience for the visitors.
Analytics
Analytical cookies are used to understand how visitors interact with the website. These cookies help provide information on metrics the number of visitors, bounce rate, traffic source, etc.
Advertisement
Advertisement cookies are used to provide visitors with relevant ads and marketing campaigns. These cookies track visitors across websites and collect information to provide customized ads.
Others
Other uncategorized cookies are those that are being analyzed and have not been classified into a category as yet.
SAVE & ACCEPT
Powered by